Things are coming together. I got the front jack hinges installed with the spacer to allow them to work as intended.  The unpainted vertical strip is the stainless steel spacer that moved the jacks 2 inches forward. 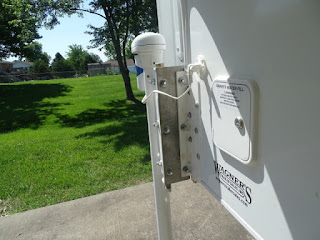 So now we are clearing the awning bracket support. 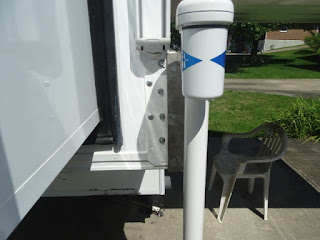 Here they are spread wide for the truck fenders to clear. 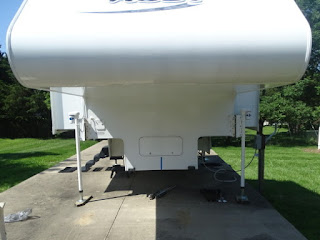 And here we are ready to roll. 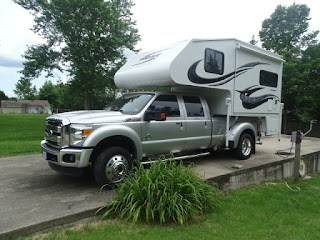 Now we just have to get the final items loaded such as stocking the fridge and we will be ready to head out next Tuesday.
Posted by Fred and JoAnn at 4:21 PM 1 comment:

Trying to get ready

With June 6th departure date rapidly approaching there are lots yet to do to get ready.  We solved the load capacity of our trucks rear wheels and tires by trading trucks for one already capable of the load.  That brought up a new situation.

The camper is 8 ft. wide and the jacks at each corner are centered at that same 8 ft. width.  To load the camper I have to back the truck between the front camper jacks.  Wait a minute, the fenders around the rear duely wheels on the new truck are also 8 foot wide so will not pass through.  Campers built for duely trucks have hinges on the front jacks that allow them to swing apart far enough for the truck fenders to clear.  So, I ordered a pair of hinges to make it work.

That order was placed over a week and a half ago with a stated 3 day delivery time from somewhere in KY.  Apparently someone in the shipping department thought that MO was the two letter abbreviation for Montana as the shipment arrived in North Dakota before someone read the zip code and then sent the package on to Missouri.  Instead of 3 days, I received it one week later and the package was all beat up with lots of clear packing tape wrapped around it.  After it was opened I found that one of the pair of hinges had apparently fallen out and was not in the package.  I'm already 4 days late in delivery and have to reorder to get the proper product.  The original provider was not receptive to an expedited re-order and just told me to return the partial shipment for a refund and to go some place else for a new set of hinges.

I found another provider that agreed to a rush 2-day UPS Air delivery which did arrive last Thursday, OK!

Yesterday I began the installation.  I blocked up the front of the camper so the jacks could be removed and started with the passenger side, right, front corner.  All seemed to go well as it was simply unbolt the jack, bolt the hinge in that location, and then bolt the jack to the hinge.  Here is the finished installation. 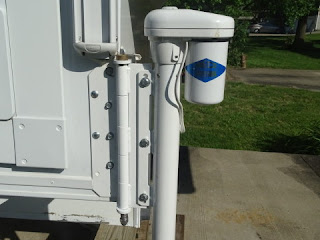 Good news, it did clear the bottom of the awning arm attachment, where the arrow is pointing. 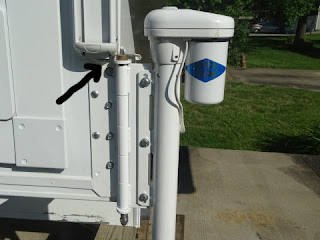 Now all that is needed is to push up on the bottom of the hinge, where arrow is pointing, and the hinge will swing out moving the jack wider for the truck.  BUT wait, bad news, it will not push up because it is against the awning bracket attachment. 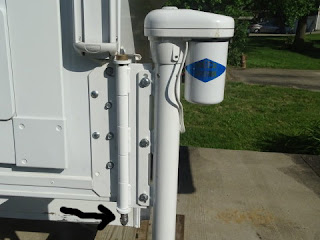 For a solution I have ask a local machine shop to make me a pair of extensions that will move the hinge 2 inches forward.  They will be stainless steel so I don't have to wait for paint to dry.  Because of the holiday weekend, it will be Tuesday before I have those extensions to complete this installation. 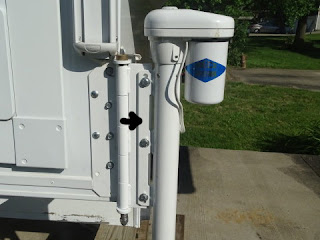 Getting close, but still on track for our trip East and looking forward to it.
Posted by Fred and JoAnn at 10:16 AM No comments:

The new beast of burden

The new beast of burden is back from the shop so I was able to take a few pictures. 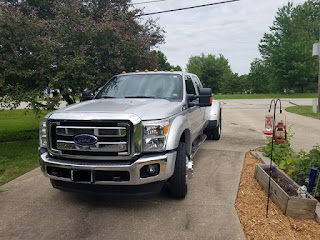 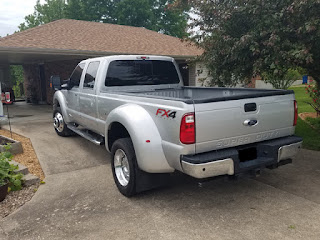 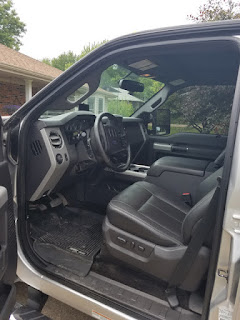 Now we have to get it mated with the truck camper.  I have hinges ordered to install on the camper front legs so they can be opened wide enough to allow for the wide hips of these duelly rear wheels to pass through. It will be a narrow difference so I will have to back carefully and slowly. 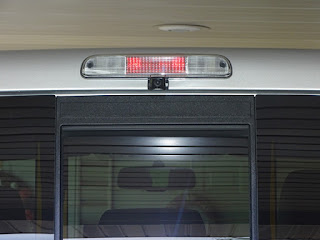 I have a back-up camera mounted in the brake light above the rear window which will be a big help in lining up and backing under.
Posted by Fred and JoAnn at 3:54 PM No comments:

The new wheels that I had ordered in early January still haven't arrived.  Our trip plans for May and another visit to the Gulf of Mexico have been canceled because of that.  The special order of 19.5" wheels made exactly to fit our truck were having problems getting raw materials for their production.  We have been getting the new camper loaded and equipped inside hoping for news on the wheels would arrive in time for our planned trip in June.

As June approaches I got anxious without any word on the wheel delivery so I started thinking, which for me is dangerous.  when I made a car-fax search on line for another truck in our area that perhaps might better haul our camper, I was just thinking what if?  It just happened that I found a 2015 Ford F450 in Columbia, MO that was listed for a reasonable price and listed with reasonable mileage.  Last Saturday afternoon Jo and I drove to the dealership to look this truck over.  Before we left for home we had signed the papers to make the trade of our 2011 F350 for this newer truck.

This F450 is a much heavier version of the truck we had.  It is well equipped to handle the camper we currently have or another much larger one if we decide to trade campers.  It comes equipped with 19.5" wheels as standard equipment plus the original (one) owner had bought it totally equipped with all bells & whistle accessories that Ford offered.

I'll get some pictures posted soon.  We are so happy to think that our visit with Phyllis in June is back to being a reality.
Posted by Fred and JoAnn at 3:20 PM No comments: