Back in the Kingdom

The locals in this area refer to this county as the Kingdom of Callaway.  This part of Missouri was very much pro-South during the Civil war and is also called the heart of little Dixie.

Backed into our driveway a little past noon today and while we so much enjoyed our time with Phyllis it's always good to be back home.  The drive today wasn't bad with very few construction sites and mild traffic.

Now its time to restock the pantry, do the laundry, get the truck serviced, and be ready for our next outing which begins on September 6.
Posted by Fred and JoAnn at 3:29 PM 2 comments:

Our original plan was to stay in Buckeye Lake until Monday and then head home but when Phyllis told us that she would be heading back to Baltimore on Sunday we changed our plans accordingly.  It's always nice to travel on a Sunday when the traffic is lighter especially through large cities such as Columbus, OH and Indianapolis, IN.

We made it through Columbus (AKA - Rabbit Trap, OH) by 9:30 am and through Indy a little after 1:00 pm with the through city traffic very light.  This will get us home a day earlier but that is okay as we will soon be getting everything ready for our longest trailer trip of this summer.

Phyllis gave Columbus its nickname or "Rabbit Trap" because on one of her first trips to Maryland driving the hand-me-down VW Rabbit she had car trouble in that area.  She can tell the whole story but as I recall she had some help from strangers to get her problem fixed and back on the road.  She eventually drove that Rabbit until it only had one gear and almost had to be pushed into the car lot for her trade in.  The odometer quit not long after she received it and there was no way of knowing how many miles she put on it.
Posted by Fred and JoAnn at 2:25 PM No comments:

How about a basket building? 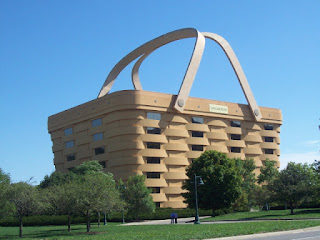 Jo and Phyllis went this morning to the east side of Newark, OH to get this picture of the Longaberger basket headquarters building.  They had hoped for a visitors center with some baskets to view but it was not open on Saturday.

This afternoon the old folks are just resting while the younger one is back out searching for antique fleas, they seem to be common in this area.

This morning we headed to Zanesville for a pottery factory tour.  The town is known for its pottery history and even have some areas decorated with symbols like this. 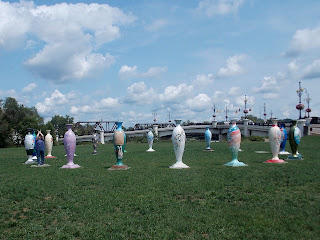 One of them was missing so Phyllis is standing on that spot.

Unfortunately when we got to the factory right at the advertised tour time we found that this week is the county fair time and the person that gives the tours had a display at the fair so today's tour was canceled.  They still had a large display of their wares for sale and it was nice to wander around looking.  After the visit to the pottery factory we found a nice quaint spot for lunch with very good food and a nice local beer.  Then we found a storefront in town that had three floors of antique fleas which Phyllis and Jo enjoyed.

On the way back to the campground we took a detour and circled Buckeye Lake to a State park on the South shore where we finally got some pictures of water. 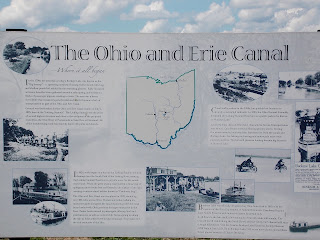 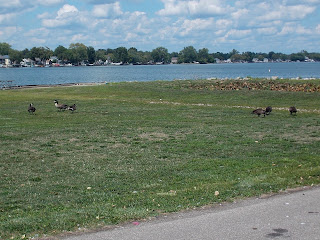 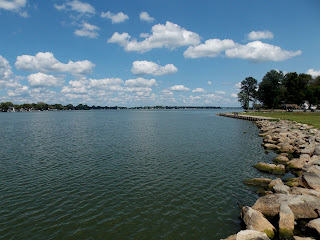 Posted by Fred and JoAnn at 2:40 PM No comments:

The weather is sure cooperating with some nice temperatures.

We had a message come up on our (actually it's Jo's) truck's computer that said I needed to check the coolant additive so this morning I went to the local Ford Service department and had that taken care of.  Just needed to have some fluid added and all is well.  While I was gone, Jo and Phyllis took off for flea markets unknown.  They just now called to say that they were on their way back to the trailer for lunch and we will see what transpires from there.

When we bought this truck they put Jo's name on the title first so I tell her that it's hers. ;-)

Phyllis surprised us by showing up driving a new car, she now has a 2012 Mini Cooper.  It's a sweet looking car that will allow her to drive many miles before needing to refill the tank.
Posted by Fred and JoAnn at 10:40 AM No comments:

Here we are in Buckeye Lake, Ohio.  We're just a few miles East of Columbus and actually 5 miles East of Baltimore (Ohio that is). ;-)  Phyllis got here about an hour ago and it was good to get a big hug from her.  Now we just have to find things to do for the next three days.  She will head back toward her home on Sunday and we will also head toward the Martin Manor that day.
Posted by Fred and JoAnn at 3:30 PM No comments:

We are now in Renfro Valley, KY.  We want to come back on another trip and enjoy the music here.  They have a music theater here with several shows weekly and the main event is a barn dance on Saturday night.  I want to plan a trip back to Kentucky with a "blue grass & bourbon" theme.  We have toured a few distilleries in the past but there is a "bourbon trail" in this area with several open for tours.  Only whiskey produced in Kentucky can be called bourbon.  Even though the process is similar I'm sure that the tours and spiel would be different.  Some are in dry counties with no samples but others have a sampling at the end of the tour.  Kentucky is also the home of Bill Monroe, the father of blue grass music and I will research the locations of shows that we can make a part of our trip.
Posted by Fred and JoAnn at 3:42 PM No comments:

Made it to our campsite in Lynnville, IN around 2:00 pm.  This city park with water and 50 amp electricity for $15 has been a great stop on most of our trips eastward.  It has easy access off of I-64 yet it is over a small hill from the interstate so there is no traffic noise.  I'm sure that with their small lake the summer weekends are busy but during the week when we are generally here there has never been a problem getting a site.
Posted by Fred and JoAnn at 3:04 PM No comments:

Our checklist is all marked off except for the last minute, after breakfast items.  With our last month's trip to Alaska being non-towing we are looking forward to getting back into the RV mode.

This will be a short nine day outing and has been modified from it's original intent.  It has always been our desire to get a visit with Phyllis on this trip but at first we had planned to stop in Ohio after a visit to White Pigeon, MI, the headquarters for our auto-leveling system.  We were going to have them update our system to the newest controller and then drop down to Buckeye Lake on our way back home.  In June, after the Martin Reunion, we drove to Chanute, KS and our trailer factory did the auto-leveling upgrade for us so there is no need now to make the trek to Michigan.  The straightest and quickest trip to Buckeye Lake, just East of Columbus, would be I-70 all the way but with time on our hands and our desire to not travel on the same route both ways we will head into a new area of Kentucky before ending up in Ohio.

Stay tuned.
Posted by Fred and JoAnn at 2:24 PM No comments: