The temperature this morning when we aroused was 33 degrees and then while eating breakfast it began to snow some large flakes widely scattered.  We loaded up and headed out and the widely scattered flakes became snow flurries and soon became a heavy wet snow fall.  On the Interstate it was soon uncomfortable with all vehicles using good sense keeping about a 100 yard spacing and all at an even 45 mph.  In the area of Springfield, IL it was the worse with heavy wet snow and deep slush on the roadway and the temperature dropped to 32.

I was truly thankful that I wasn't pulling a large box with an extra two sets of wheels with a swivel in between the truck and trailer.  This new single unit was a no white knuckle drive.  As we continued westward it began to wane and lighten.  By the time we crossed the Mississippi it was still snowing lightly and the roadway was a bit clearer with little slush.  By the time we crossed I-70 at Kingdom City the snow was all gone and it was dry pavement and clear sailing to the Martin Manor where the temp was a balmy 38.

Okay, I promised pictures.  Here is our new camper parked at the Martin Manor RV park.  I have already posted pictures of the inside.


rooms out ready to camp 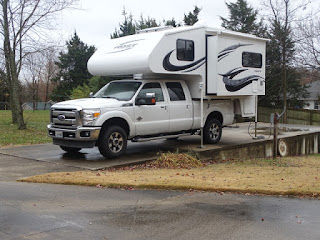 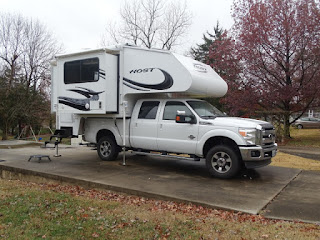 rooms in ready to travel 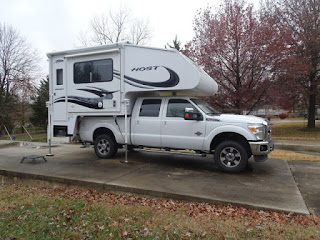 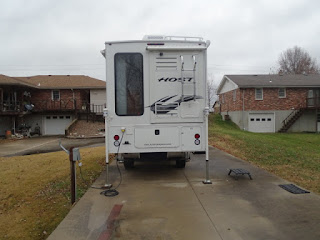 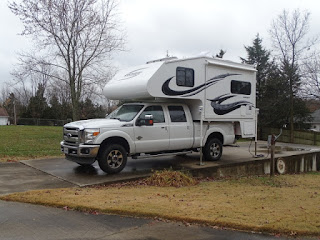 Made it back to the dealers by 9:00 am and they worked on our questions very quickly as Saturday was not a busy day. Our questions were resolved and we were on the road a little past 10:00 heading South.

We are now in an Illinois State Park a little south of Bloomington, IL.  Because of our late start this morning it was dark when we arrived and that isn't a good time to try and set up a new to us camper.  It was hard to see to back up into our spot without backup lights on the camper.  We do have a back up camera and I put Jo to walk behind down the center of the site and I tried to run over her backing up.  I could see her in the camera but nothing else.

I had intended to take some pictures this afternoon but will have to do that another day with the sun shining.  Tomorrow we head back to the Martin Manor.
Posted by Fred and JoAnn at 6:39 PM No comments:

It's going to be a beg learning curve.  We are camped tonight in a Wisconsin State park with electric hookup and finding out just how different this is going to be.  We are only a few miles from the dealer we bought this unit from and that is a good thing as we have found a couple of items that are not working like they should.  We have called our salesman this afternoon and will head back to his shop to get things working like they should before we head on toward home.

Sorry no pictures today, but soon
Posted by Fred and JoAnn at 6:12 PM No comments:

We made it to our RV Sales destination a little past noon today without any further tire problems.  We dropped the bad tire off at a tire dealer nearby to have a new tire mounted and they will deliver it to the RV sales office so they will then have a full set for our trade in.

Tomorrow morning they will add a few suspension strengthening items to our truck and then mount and give us a walk through of our new Truck Camper.  I hope to have a few pictures to post tomorrow.
Posted by Fred and JoAnn at 2:31 PM No comments: